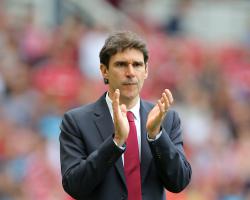 Gaston Ramirez scored a solo masterpiece as Middlesbrough reversed their worrying home form with a commanding 2-0 victory over Bournemouth.

Ramirez's first-half effort was a thing of beauty, starting with a brave block deep in his own half and continuing the length of the pitch as Harry Arter, Andrew Surman and finally goalkeeper Artur Boruc were beaten by his drive, guile and craft.

For a side who had taken a single point from their first four games at the Riverside it was a heady moment, followed in the second half by another pleasing move finished by local boy Stewart Downing.

The 32-year-old last scored a Premier League goal for his hometown team in May 2008, in an 8-1 triumph over Sven-Goran Eriksson's Manchester City

In the intervening years much has changed for all concerned.

In all there were 14 Englishmen in the starting sides, though Gareth Southgate, former Boro boss and now interim manager of the national side, was nowhere to be seen.

There were early signs that Ramirez was in the mood, snaffling a loose ball from Arter in the opening seconds and pressing with greater conviction than usual.

On the opposite flank Adama Traore was also causing problems with his direct running but Boro needed Adam Clayton to head off the line after Joshua King clipped a corner goalwards.

Traore had a decent penalty shout in the 18th minute when, after leaving Arter for dead, he drew a sliding tackle from Charlie Daniels.

There did appear to be contact but Traore's tumble was belated and did nothing to persuade Stuart Atwell to point to the spot.

Jack Wilshere, whose case for an England recall is gathering momentum, unlocked the home defence after 27 minutes, scooping a pass over the back four and finding King, who cushioned the ball on his chest.

With Victor Valdes advancing, King volleyed instinctively with the outside of his boot but saw the ball canon back off the crossbar and away.

With Wilshere and Jordon Ibe pushing their side forward, Bournemouth had just started to set the tempo when Ramirez intervened quite brilliantly.

In many ways, his was the perfect goal.

As the goal came into view Surman was sent packing with a neat turn and Boruc beaten with a measured shot.

It was good enough to win any game but, with just 37 minutes on the clock, Boro could hardly be sure at that stage.

They started confidently in the second period and fashioned another pleasing goal in the 56th minute.

Traore picked the lock this time, floating a delightful ball towards Alvaro Negredo with the outside of his boot.

Rather than aim at goal, the Spaniard headed it back across for Downing who gratefully finished the job and celebrated passionately.

Afobe's work handed Smith a chance to strike from 12 yards but Calum Chambers, impressive alongside defensive partner Ben Gibson, got his body in the way.

The Cherries ensured no further damage was done, Wilshere tracking back with a goal-saving challenge to rob Traore.

Fraser even threatened a consolation with a cross-shot that required Valdes' attention but there was no way back.