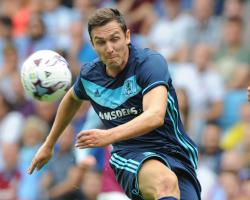 Boro followed up their opening day draw with Stoke with a 2-1 derby victory over Sunderland on Sunday to secure a first top-flight win since their return and strengthen their belief that they belong in the big time.

Former Aston Villa, Liverpool and West Ham midfielder Downing was always confident his home-town club would have what it takes to mix it in the Premier League, but he knows their adventure has only just begun.

He said: "We were always confident behind closed doors that we had the squad

We have signed some big players and they are performing well.

"I feel confident we can do well, it's been proved in the two games that we can match it

But there's a long way to go yet

We have a lot of points to play for and we have to play like that every week.

"We will have tough times and it's how you come through them as well."

Aitor Karanka's men found themselves under the cosh in the early stages at the Stadium of Light and needed something special to set them on their way.

That came with 13 minutes played when Cristhian Stuani sent a dipping long-range shot over Black Cats keeper Vito Mannone and into the top corner to give the visitors the lead against the run of play.

The Uruguayan doubled his tally as half-time approached, making the most of superb build-up work by Adam Forshaw and Alvaro Negredo to beat Mannone for a second time, leaving Patrick van Aanholt's 71st-minute reply for Sunderland to count for little.

Stuani was an unused substitute against Stoke and Downing, in his second spell at the Riverside Stadium, believes that is a measure of the strength of Karanka's hand this season.

He said: "Cristhian comes in today for his first start and gets two great goals, but it's a squad game and we have got strength in depth now

We have got two players in nearly every position, so you have got to be on your toes and play well.

It's obviously disappointing when they don't play - everyone is like that - but it's a team game and players will be needed over the course of the season."

The win leaves Boro in sixth place in the table after two rounds of fixtures and although their only focus for the campaign is survival, that is more than satisfactory.

Downing said: "The bigger picture is we have won, three points, that's four on the board

It's been a relatively good start for us.

"Overall, we should have beaten Stoke, but we'll take a point and we'll go to West Brom now and if we can get something there, it's been a good start."