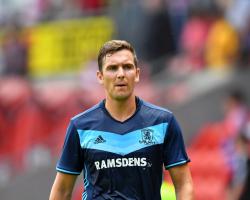 The 32-year-old England international came through the ranks at his home-town club, sitting on the bench as a teenager when they won the League Cup in 2004, later cutting his teeth in European football and making himself a regular first-teamer at the Riverside Stadium.

Boro's fall from grace - they were relegated from the top flight at the end of the 2008-09 season - saw him head for Aston Villa in a ÃÂ£12million move, and it took him six years to work his way home via Liverpool and West Ham.

A season in the Sky Bet Championship proved challenging, but Karanka has seen enough during the opening weeks of the new season to be confident that his ÃÂ£5.5million signing will thrive amongst the big boys once again.

The Spaniard said: "He is really important because he is enjoying it

You can feel that he is more comfortable now than he was last season in the Championship.

"He is an important player and he's an example for us, especially for the players on the pitch

He has played a lot of games in the Premier League, so he is a good reference for us."

A left winger by trade, Downing thrived in a central midfielder role for the Hammers, a position in which he was asked to play by Karanka in Wednesday night's 2-1 EFL Cup second round defeat at Fulham.

He is likely to return to the left side of a three-man attacking midfield at West Brom on Sunday but his versatility, as well as his experience, is something the head coach appreciates.

Karanka said: "He can play in different positions and it's those kind of players I like because now in the Premier League, he is playing really, really well."

Downing is not the only member of the squad who may have to demonstrate a capacity to adapt this weekend with all three of the club's specialist left-backs missing through injury.

Defender Bernardo Espinosa is available after overcoming his own knee injury, but Karanka will have to ask a man not accustomed to the role to fill in at left-back.

The Spaniard was less than impressed with his side's extra-time surrender at Craven Cottage, which came three days after they had collected their first league win of the campaign at Sunderland.

He was always confident they would be able to compete after seven years in the wilderness, but was delighted to see his players prove him correct at the Stadium of Light.

Karanka said: "It was massive

When you have three points on the table, it is easier to believe, to be calmer

For that reason, it was really important."