Picking the Best Italian XI of the Premier League Era

When they're not casually ​dinking penalties down the middle to send England packing from the Euros, they're bringing their stylish charm to the ​Premier League and teaching the locals how to play football.

​There's nothing quite like the suave nonchalance of an Italian player who knows he's better than everyone else - just take one look at Andrea Pirlo and Gianluigi Buffon if you don't believe me.

But while those two never graced the Premier League, a bunch of other guys did - and here's the pick of them. 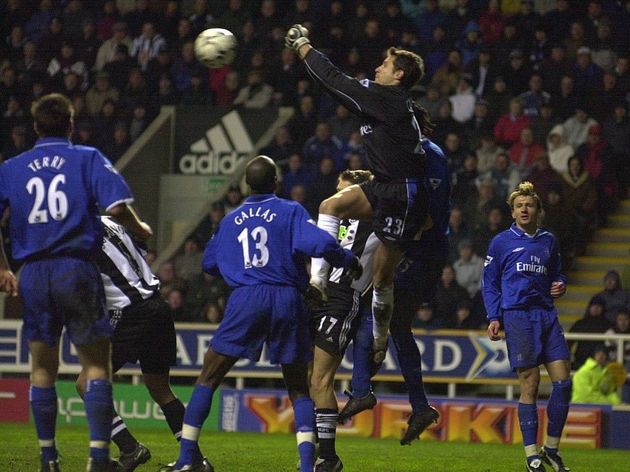 Pistone was primarily a left-back, but he was versatile enough to justify shifting him across. He wasn't spectacular, but did a steady job for ​Newcastle and Everton over a combined ten years in the Premier League. That thing we said about there being hardly any Italian full-backs? That also applies to centre-backs. Materazzi is a man best known for taking the most famous headbutt in history square on the chest. Seven years prior to establishing himself in pretty stellar Inter and Italy sides and becoming a World Cup winner with the latter, however, Materazzi was best known to fans in England for his colourful season with Everton.

As part of a back-line marshalled by the stoic Davie Weir, he managed to rack up three red cards in just 27 appearances for Walter Smith's side before heading back to Italy. Dossena, you might not have given us much, but you did give us that stunning free-kick as Rafa Benitez's Liverpool ran riot at Old Trafford in 2009. And given the circumstances here, that is enough. The final six seasons of Di Matteo's highly-respected career came as he settled into life in England with Chelsea in the late 90s and early 00s, and though he didn't quite catch the beginning of the Roman Abramovich money era (that would come later as a manager) he still racked up six major honours at Stamford Bridge.

A classy playmaker playing alongside the legendary Dennis Wise, he twice got his hands on the FA Cup among six major honours. There's something about Chelsea and Italian players. The second part of our midfield double-pivot is just one of two active players who make the cut here and that can come as no surprise.

He's one of the most efficient ball-carriers in the division and is now shining without the crutch of Maurizio Sarri, although a ​reunion on that front might not be too far away. He's shunted out onto the right wing for obvious reasons. Once an understudy of Diego Maradona (the ​greatest player of all time, by the way) Zola went on to have a glittering career, the largest section of which came with Chelsea - who seem to have a thing for Italians, now we're thinking on it.

Zola's intelligent use of space and killer final ball earned him 80 goals in 311 appearances for the Blues and he remains thought of as one of their all-time greats. A very, very good striker that made some very, very bad decisions. He had two spells in England, but both came with sides who were ultimately relegated from the Premier League; Ravanelli knew how to choose them.

Despite the fact both teams he played for were pretty dung, the target man registered 48 goals in 103 appearances for Middlesbrough and later Derby. He would later, bizarrely, feature for Dundee in Scotland. Rounding off our Italian XI, Vialli earned his stripes as part of a deadly partnership with Roberto Mancini at Sampdoria, kicking off a journey that earned him a move to Juventus and then, you guessed it, Chelsea.

He was hamstrung with injuries while in England and managed just short of 90 appearances over his three years, but continued to be a consistent goalscorer - even after taking over from Ruud Gullit as player-manager in 1998.