Day 1,000 lost in football wilderness. Spirits are low. We're out of toilet paper. People are fighting over bread.

There might not be any football going on right now, but 23rd March has seen plenty of action in the past. History has been made on this day, and there has been a whole load of excitement to go alongside that.

Let's take a look at some of the best moments on this day in football history.

23/03 - On this day in 1878, Wanderers became the first club to win the FA Cup in three consecutive seasons, something only Blackburn Rovers have emulated since. Nomadic. pic.twitter.com/45RsbXpsV1

During the early years of the FA Cup, Wanderers were the dominant force around. They won the competition five times in the 1870s, including three in a row between 1875 and 1878.

The 1878 final saw Wanderers pick up a 3-1 win over Royal Engineers, making them the first team to ever win three consecutive titles. Since then, only ​Blackburn Rovers have matched that feat, doing so between 1884 and 1886.​ 23rd March is a special date in English history, as it was on this day in 1888 that the English Football League was born.

The idea of the EFL was discussed between 12 clubs, and the whole thing was eventually finalised in April. ​Championship Now, apart from a one-sided scoreline, this match doesn't really look like much. However, the most memorable part of this game came after referee Arthur Blythe controversially decided to suspend the game​ late on for what he claimed was poor weather.

Newport County fans were furious and started rioting, so to protect Blythe, he was disguised as a policeman and smuggled out of the ground in an ambulance – not dissimilar to that bloke down Tesco this weekend who bought three packs of toilet roll. March 1994 was a rough month for Eric Cantona. Not only was the ​Manchester United man sent off on 19th March for a stamp on Swindon's John Moncur, but he was dismissed once again just four days later.

Cantona picked up two bookings in the space of three minutes in a 2-2 draw with ​Arsenal, and his lack of discipline earned him a five-match ban.​ Manchester United were pushing to retain their Premier League title in March 2002, but they saw their dreams torn apart as ​Middlesbrough picked up an unlikely 1-0 win at Old Trafford thanks to an early strike from

​AC Milan strolled to the ​Serie A title in 2003/04, and they looked to be on track for ​Champions League glory when they picked up a dominant 4-1 win over ​ ​Cristiano Ronaldo was on top form for United in the 2007/08 season, and he bagged one of his 31 league goals in this 3-0 win over ​Liverpool.

Wes Brown and Nani also got themselves on the score sheet to steer United to an emphatic victory, which helped the Red Devils towards their 17th league title.​

ON THIS DAY: In 2014, Lionel Messi scored a hat-trick as Barcelona beat Real Madrid 4-3 at the Bernabéu.

And became the all-time top-scorer in El Clásico history in the process.  pic.twitter.com/Q6NHkxZAc9

El Clásico is usually pretty fun. There have been plenty of exciting clashes between ​Real Madrid and ​Barcelona, but La Blaugrana's 4-3 win in 2014 is near the top of the pile.

Trailing 2-1, ​Lionel Messi bagged an incredible hat-trick to steer Barcelona to victory, becoming the top scorer in Clásico history in the process.​ A solid day's work. 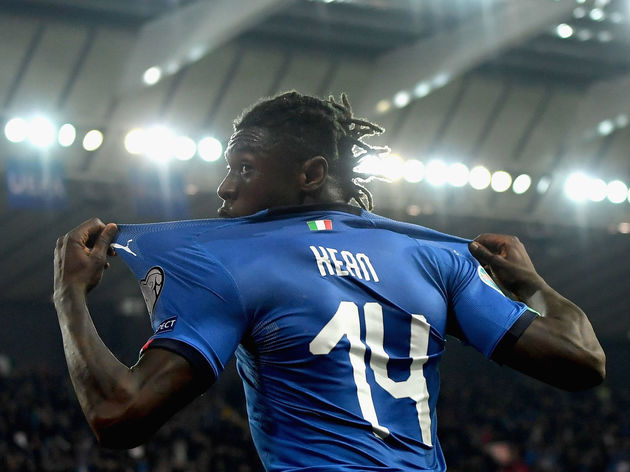 Italy's 2-0 win over Finland was all about striker Moise Kean, ​who became the first player born in the 2000s to score for the national team when he slotted home from close range.

The goal also made him the second youngest goalscorer in Italy's history, behind only