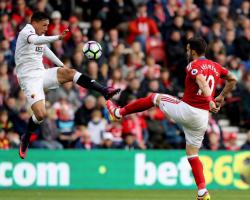 The Greece international's 54th-minute strike was of stunning quality, but in stark contrast to much of what either side produced during a largely dour 90 minutes with clear-cut chances at a premium.

Boro created the better of what few opportunities there were and saw four penalty appeals rejected by referee Roger East, some of them with greater merit than others.

In an ordinary contest, few players excelled and the quality of Watford wing-back Jose Holebas' decisive goal was a rare oasis in the desert

He will not catch many sweeter than that one.

MOMENT OF THE MATCH

Middlesbrough keeper Victor Valdes had been a virtual spectator for much of the opening 54 minutes, but he found himself picking the ball out of the net when Holebas unleashed a fierce strike from distance after running on to Marten de Roon's clearance.

Boro's Alvaro Negredo powered a 28th-minute header just over the angle of bar and post, but was relieved rather than disappointed

The striker was back inside his own penalty area and came perilously close to converting Holebas' free-kick in some style.