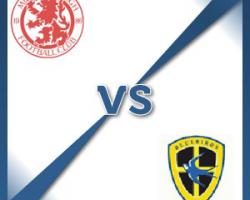 Middlesbrough V Cardiff - view commentary, squad, and statistics of the game live.No new worries for BoroMiddlesbrough boss Aitor Karanka has no fresh selection problems as he looks to maintain the club's promotion challenge against Cardiff.The Spaniard will have the same squad available to him as he did for Saturday's 2-0 home victory over Huddersfield, which cemented the Teessiders in fourth place in the Sky Bet Championship table

However, defender Daniel Ayala will walk a disciplinary tightrope as he attempts to avoid a 10th booking of the campaign, which would rule him out of the glamour FA Cup fourth round trip to Manchester City at the weekend.Karanka will once again be without full-backs Emilio Nsue, who is on African Nations Cup duty with Equatorial Guinea, and Ryan Fredericks as he continues his recovery from a thigh muscle injury.Midfielder Muzzy Carayol is closing in on a return from his long-standing knee injury, although he is yet to play a reserve team game, while defender Damia Abella remains sidelined with his knee problem and utility-man Rhys Williams (Achilles) is just starting another long haul back to fitness.Cardiff could again be without top scorer Kenwyne Jones when they make the long trip.The former Sunderland forward is suffering with a hip injury that forced him out of Saturday's 3-2 defeat at Norwich and will be assessed in the build-up to kick-off at The Riverside.Alex Revell grabbed a goal and an assist on his full debut as Jones' replacement and will hope to have done enough to keep his place as the Bluebirds search for just their second away win of the campaign.Kadeem Harris joined Revell on the scoresheet having stepped off the bench and his lively display could earn the winger a start