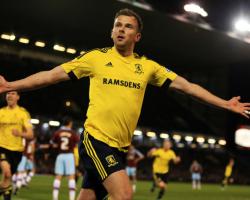 Rhodes, a ÃÂ£9million signing from Blackburn in January, has been left kicking his heels as newly-promoted Boro have made an unbeaten start in the Premier League and reports emerged last week that he could be on his way out of the club.

He was an unused substitute in the opening-day draw against Stoke and left out of the squad altogether in Sunday's 2-1 win at Sunderland, but Karanka insisted the 26-year-old remains part of his plans and hinted he could feature in the second-round tie at Craven Cottage.

"Everybody who is in the squad will have his chance," Karanka said.

"I'm going to make changes because I have a lot of good players and for sure Jordan is one of them and he will have his chance.

"I've spoken to him, I speak with all the players and I said after (Sunday's) game that Jordan is a really good kid and I told him I trust him 100 per cent, the same way I trusted him when he came here.

"But now he understands that with Alvaro Negredo, with (David) Nugent, with him and with (Cristhian) Stuani, who can all play in that position, there is more competition but it's good for everybody, for the team.

"It's difficult to be the best one because all of them are really good and it's important for him to train in the way that he has been doing because one day he will have his chance.

"He's fighting, since we started pre-season and since Negredo arrived, and I feel he's ready and one day his chance will appear."

Karanka confirmed goalkeeper Victor Valdes remains sidelined due to the hamstring strain that kept him out at the weekend but centre-back Daniel Ayala, who made his first appearance as a late substitute on Sunday following a hamstring injury, and summer signing Fabio will feature.

Boro have made an impressive start to life back in the top flight, but Karanka will use Wednesday's EFL Cup tie to remind his players that none of them are assured of a starting place.

"It's true we have to keep our feet on the ground because the start of the season has been really good," he added