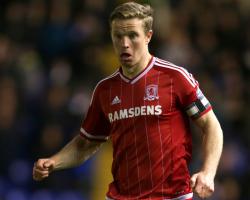 The 30-year-old midfielder was a key figure in Boro's promotion drive last season despite playing through the final two months of the season only after having a series of painkilling injections.

Leadbitter has now had an operation, but the problem was more extensive than first thought and he will not now be fit for the start of the new season.

A statement on the club's official website, www.mfc.co.uk, said: "Grant Leadbitter is set to miss the start of the 2016/17 Premier League season after undergoing surgery earlier this year.

"The Boro skipper had an operation to correct an injury he had been carrying for the last two months of the season and further investigation has shown that the injury is worse than first anticipated."

Head coach Aitor Karanka will also be without full-back James Husband, who is due to have surgery on the shoulder he dislocated during last Saturday's 6-0 friendly victory at York on Monday.

And the bad news is that the defender could be sidelined for up to three months.

The statement continued: "James Husband also joins the injury list and is facing a lengthy spell out of action with the left-back awaiting an operation to repair a dislocated shoulder.

The defender could be out for up to three months."

Meanwhile, central defender Daniel Ayala will sit out Saturday's friendly trip to Doncaster with the ankle problem he suffered shortly after his return for pre-season training.