Middlesbrough promoted to the Premier League after draw with Brighton 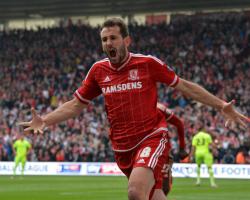 Christian Stuani's first-half goal eased the home nerves at a sold-out Riverside Stadium and they held on despite Dale Stephens giving Brighton hope with a headed equaliser early in the second half.

Stephens went from hero to villain four minutes later when referee Mike Dean adjudged his tackle on Gaston Ramirez was a red-card offence.

Raimrez was forced off with a nasty gash on his leg, meaning eight minutes of stoppage time to add to the tension, but Boro held on to spark jubilant scenes.

Brighton must now earn promotion the hard way in the play-offs, where they will face Sheffield Wednesday.

Burnley did not have to worry about the result in the north-east as they clinched the title in style with a 3-0 victory at relegated Charlton.

Sam Vokes tapped in from close range to give the Clarets the lead before second-half goals from George Boyd and Andre Gray sealed a comfortable win, although Sean Dyche's men will not receive the trophy until a civic reception in east Lancashire on Monday.

Hull boosted their confidence ahead of the play-offs with a 5-1 thrashing of Rotherham despite going behind.

Lee Frecklington gave Rotherham a 16th-minute lead but Hull hit back with two goals in 98 seconds through Robert Snodgrass and an overhead kick from Abel Hernandez.

Hull added another quick-fire brace before half-time through David Livermore and Mohamed Diame and Livermore's second completed the rout.

It was a different story for Hull's play-off opponents Derby as they slipped to a 1-0 defeat at home to Ipswich and had influential midfielder George Thorne carried off on a stretcher.

David McGoldrick scored the only goal from the penalty spot after Richard Keogh fouled Teddy Bishop.

Sheffield Wednesday will also go into their play-off semi-final against Brighton on the back of a defeat after losing 2-1 at Wolves.

Sergio Canos scored the first goal of the day after just 21 seconds to set Brentford on their way to a 5-1 win at Huddersfield, with in-form Scott Hogan adding a second-half double.

Jamie Paterson had levelled for Town but Lasse Vibe and John Swift were also on target in the second half as the Bees cruised.

Cardiff had to settle for a 1-1 draw at home to Birmingham in Russell Slade's final match in charge, Anthony Pilkington cancelling out David Cotterill's opener

Bolton were beaten by a Tom Cairney strike at Fulham to end the season without an away win while Britt Assombalonga's first goal in nearly 15 months secured a 2-1 victory for 10-man Nottingham Forest against Milton Keynes Dons.

Chris Cohen had put Forest ahead but Nicky Maynard levelled before the visitors had Danny Fox dismissed eight minutes before the break.