Middlesbrough move to bring in Viktor Fischer from Ajax 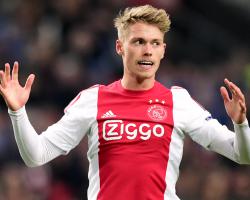 Boro, promoted back to the Premier League this season, will pay the Dutch club an undisclosed fee for Fischer - who will sign a three-year contract.

Fischer, who has eight caps for Denmark, has over 100 senior appearances to his name since joining Ajax in the summer of 2012.

He scored 11 goals in 39 games for the Amsterdam club last season, including one against Celtic in the Europa League.