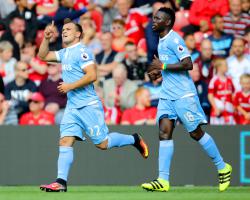 Switzerland international Shaqiri beat Boro keeper Victor Valdes with a curling 67th-minute effort to cancel out debutant Alvaro Negredo's opener as the Teessiders dominated for long periods in front of a crowd of 32,110.

Indeed, had the impressive Gaston Ramirez not been thwarted by both the post and the bar before the break, they might have had the points wrapped up long before the Potters levelled to snatch a 1-1 draw.

Stoke's 40-year-old keeper Shay Given, starting in place of the injured Jack Butland, had to tip a speculative effort from Albert Adomah on to the roof of his net and Ramirez headed over from a Stewart Downing corner inside the opening eight minutes.

But Stoke did not heed the warnings and fell behind with 11 minutes gone when Adomah, this time from the left, crossed deep for Ramirez to head back across goal and Negredo climbed above defender Philipp Wollscheid to bundle the ball into the net.

The visitors gradually started to work their way into a physical game - there were four bookings in eight minutes, the last of them for Given as he fell foul of reinforced dissent rules after racing from his line to protest over Ramirez's challenge on Erik Pieters - with Bojan Krkic and Shaqiri belatedly finding their feet.

But it was the Teessiders, despite losing Marten de Roon to a hamstring injury, who continued to threaten on a more regular basis and they were denied a second when Ramirez fired a left-foot shot across Given from the corner of the penalty area and saw it clip the post.

The former Southampton midfielder was enjoying his afternoon and he rattled the goal-frame once again in stoppage time, curling a corner against the crossbar with the keeper beaten.

For their part, the Potters offered little of note going forward with Marko Arnautovic blazing wide after cutting inside from Pieters' pass and Shaqiri wasting a good one-two with the Austrian by firing into the side-netting after collecting a deflected return pass.

Stoke's efforts to force their way back into the game were laboured and Arnautovic volleyed well wide after bursting onto Pieters' intelligent 58th-minute throw-in, although the home side should probably have extended their lead on the hour when Adomah was set free down the right but could only pick out defender Phil Bardsley, with Negredo and Stewart Downing awaiting his pass.

Arnautovic was the visitors' biggest threat but simply could not find his bearings, to the point where he uprooted a corner flag with his 64th-minute shot.

However, Shaqiri finally made an impact with 23 minutes remaining when he curled a fine free-kick over the defensive wall and looked on as Valdes could only help the ball into his bottom corner.

Wollscheid was booked after appearing to lash out at Ramirez in a frenetic conclusion, but there was to be no late drama.