Middlesbrough back in the Premier League after draw over Brighton 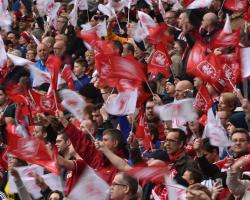 Needing just a draw against promotion rivals Brighton, Boro were pegged back by a second-half equaliser from Dale Stephens who was later sent off as the Seagulls pressed desperately for the goal that would take them up instead.

Talk of a ÃÂ£200million jackpot seems obscene in a region recently blighted by steel redundancies, and the celebrations at the final whistle intimated Boro's joyous supporters are more interested in a prize that money could not buy.

Seven years after sinking out of the top flight on the final day of the season, Aitor Karanka's impressive if occasionally tumultuous revolution was complete, and some of the biggest clubs in the world will be back at the Riverside Stadium next season.

Brighton, who travelled north in search of their own fairytale 19 years after Robbie Reinelt's goal at Hereford prevented them dropping out of the Football League, must now prepare themselves to seek promotion through the play-offs.

Chris Hughton's Seagulls, who had soared back into automatic promotion contention on the back of a 13-match unbeaten run, knew only a win would be good enough to join Burnley back in the top fight for the first time since 1983.

Karanka, inspired by the belief that his side had learned from last season's play-off final defeat, responded boldly by bringing Stuani back into his line-up and leaving local boy Stewart Downing and striker Jordan Rhodes on the bench.

In an opening period in which neither side betrayed signs of nerves, Sam Baldock saw a first-minute chance deflected out for a corner for the visitors, while Albert Adomah just failed to reach a Stuani cross in front of goal.

Brighton had marginally the better of the early exchanges, Stephens seeing a long-range effort tipped over, and Boro keeper Dimi Konstantopoulos plucking an Anthony Knockaert cross off the head of Connor Goldson.

Karanka's selection was spectacularly vindicated in the 19th minute when Boro grabbed their opener, David Nugent flicking on a free-kick and Stuani stretching to poke past David Stockdale in the six-yard box.

Goldson deflected a second Stuani effort over the bar and Ramirez floated an attempted lob onto the roof of the net as Boro pushed to effectively finish the job and rubber-stamp their top-flight return.

Boro ended their first half guilty of squandering a number of good opportunities to score a second, and they were punished nine minutes into the second half when Stephens headed home a Knockaert free-kick at the far post.

But the balance of the game swung dramatically just three minutes later, when goalscorer Stephens was sent off for a foul on Ramirez which left the Uruguayan to be carried off with what looked like a serious injury.

Adomah could have settled the hosts' mounting nerves when he swung at a loose ball in the Brighton box with three minutes to go, forcing a brilliant point-blank reaction save out of Stockdale.

But the home side remained relatively calm through the rising tumult of eight minutes of injury time, a last, sure catch from Konstantopoulos finally signalling the inevitable, wild pitch invasion from home fans, their journey complete.