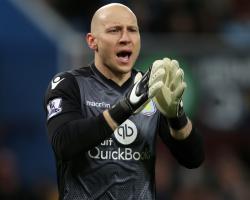 The United States international has agreed a two-year contract with the Teessiders.

Guzan made 34 appearances for relegated Villa last season and played every match in the USA's run to the Copa America semi-final.

The 31-year-old is likely to be back-up at Boro to former Barcelona and Spain goalkeeper Victor Valdes, who joined the newly-promoted Premier League club earlier this month.