If ever there was a stat to emphasise just what a paradox of a club Manchester City has been in the Premier League era, it’s that.

To many it will seem like City have been a cornerstone of England’s elite forever, but they have in fact been relegated from the Premier League almost as many times as they've been champions. 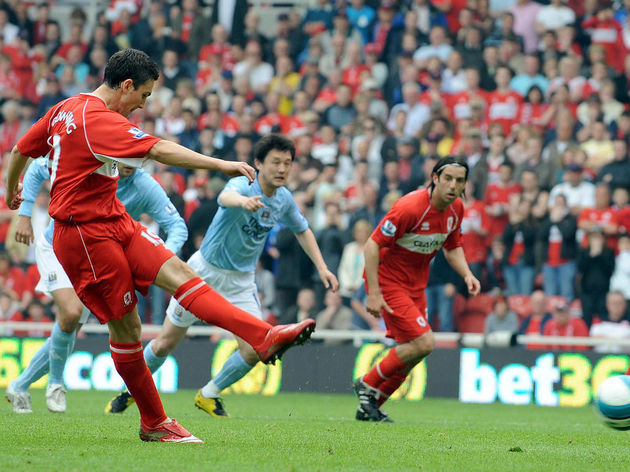 The landscape of ​Manchester City Football Club changed in 2008, when Khaldoon Al Mubarak and his Abu Dhabi United Group purchased the club, forging a pathway for City to compete with Europe’s elite.

In doing so, long-suffering City fans were relinquished of the shackles of relegation struggles, second tier misery and mid-table mediocrity.

However, on 11 May 2008, the Citizens travelled to Teesside with one last chance to remind their adoring following of the life they were leaving behind, and boy did they give them an afternoon to remember.

Richard Dunne’s 15th minute dismissal saw Sven-Göran Eriksson’s side facing an uphill task, but nobody could have envisaged what was to come.

A hat-trick from the mis-firing Afonso Alves, a Stewart Downing double and goals from Adam Johnson, Fabio Rochemback and Jérémie Aliadière (yes, even him) saw ​Boro record their biggest ever top flight win. An 87th minute Elano consolation did little to spoil the Riverside party.

What game was Gareth Southgate watching? Having taken the reins at the Riverside following the departure of Steve McLaren, Southgate - like any other manager - wanted to put his stamp on the team. This was his team, not McLaren’s.

Perfectly acceptable. What wasn’t acceptable, however, was Southgate’s insistence on utterly dismantling a side which had reached the UEFA Cup final just a few years prior, consisting of Premier League quality players like Mark Viduka, Jimmy Floyd Hasselbaink and Yakubu, and replacing them with Afonso Alves and Aliadière.

Boro had endured a bit of a torrid season, with many of Southgate’s acquisitions (Alves, Gary O’Neil and Aliadière) proving they weren’t up to the task. However, Southgate still had a number of Boro’s UEFA Cup final heroes at the club, and they were proving themselves to be good enough to cut it in the Premier League. 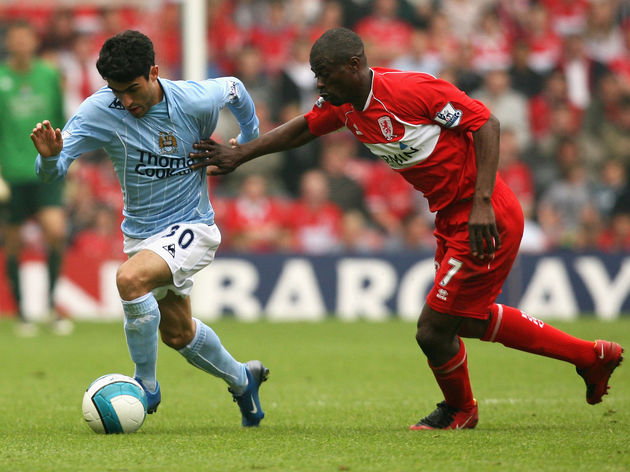 Their 8-1 demolition of City on the final day of the season was a stark reminder to Southgate that the likes of Rochemback, Mark Schwarzer and George Boateng had big roles to play at Boro.

So what did Southgate do? He sold them all, of course. What happened to Boro next season? They got relegated, obviously.

Despite City being down to ten men, anyone with half an ounce of footballing knowledge could watch the performance of these individuals and tell you that they were quality players and more than good enough to be at a club like Middlesbrough. But not Gareth Southgate.

Quite often, the footballing community turn their nose up at Stewart Downing. He’s seen as a bit of a joke, having flopped on the grandest stage when he secured a move to Liverpool. However, this opinion is completely unwarranted. In his first spell at Boro, Downing was unplayable. An old-fashioned winger who could get to the byline and deliver quality service every time, his wand of a left foot saw him earn 35 England caps along with numerous individual accolades during his time in the Premier League.

Boro’s 8-1 pummelling of City highlighted what a class act Downing was. The City midfield couldn’t get near him, with his defence-splitting volleyed assist for Alves’ second arguably better than his outside of the boot volley which notched his second goal of the game.

With the score at 4-0, City brought on hatchet man Dietmar Hamann in an attempt to stifle the Boro star. The move did little to suppress Downing’s stranglehold on the game as he ran rings around the ageing Hamann for the remainder of the game.

A true masterclass on how to control a match.

To the tune of Pink Floyd’s ‘Brick in the Wall’: “Hey, Thaksin, leave our Sven alone.”

The travelling City faithful spent the afternoon remonstrating with then City owner Thaksin Shinawatra over the rumoured dismissal of Sven. Despite only being appointed ten months ago, speculation surrounding the Swede’s future was rife, with reports suggesting the squad had already been told Eriksson would not be in charge next season. It was even more baffling when you consider that, despite some dire recent form, City were on course for their best Premier League finish ever and were set for UEFA Cup qualification via the Fair Play route.

The City squad were reportedly as disgruntled at the news as the travelling fans, and rumour has it the players had well and truly downed tools for the trip to Teesside. Any team can get beat away from home when down to ten men, but Middlesbrough were quite frankly rubbish; they’d only secured their Premier League status a week earlier, so something was clearly up for City to go down 8-1.

Could it be that the City side, in a show of solidarity for their departing boss, had decided they wanted to get hammered. If you watch back some of the goals they conceded on the day, it’s certainly a feasible theory.

Ball was made to play centre back following the dismissal of Richard Dunne, so criticism is perhaps harsh, but nonetheless, he put in one of the worst Premier League defensive performances you are likely to see. The former Everton man looked like he’d won a competition to play for City, aimlessly hoofing the ball every time it came near him and charging into challenges. The most effort he put in all game was pretending to look like he was upset every time he gave the ball away and Boro subsequently scored.

Of course, it takes two to make a dreadful centre-back partnership, and Ball’s partner in crime Vedran Ćorluka comes a close second in the ‘Clown of the Day’ award. Head down, bulldozing his way into challenges like Boris Johnson at a Soccer Aid event, the former Croatia international managed to make Aliadière look like he had the touch of Dennis Bergkamp.

Special mention to Hamann, who, despite bossing a Champions League final just three years prior, managed to make it look like he was towing a caravan for most of his 30-minute cameo.

Things That Aged the Worst

Things that aged the worst...well, Adam Johnson's career for a start, but let's not get into that.

Also, Middlesbrough. The club have been on a downward spiral for a long time now, and their relegation the following season came as no surprise. Currently enduring life under the tactically inept Jonathan Woodgate, the club seem to be going nowhere fast.

Things That Aged the Best

It’s easy to look at the regime under which they have flourished and mock it and pick holes in it, but the fact is it’s not easy to do what they have done.

Many clubs have tried, throwing millions at expensive signings, but it’s not as easy as that. The club had a long-term vision and they have successfully carried it out. Their first season under the Abu Dhabi United Group’s tenure was pretty mediocre. They actually finished lower in the league than they had the previous season, but their recruitment was clever. Yes, there was the odd Robinho signing, but with it came Shay Given, Craig Bellamy and Wayne Bridge; players who knew the league.

From there they began to grow, always keeping a nucleus of players who knew the league (

We've also got to give an honorary mention for Southgate’s managerial career. How on earth has a man who trusted David Wheater and Brad Jones to provide the defensive stability to keep a team in the Premier League become his country’s head coach? Bravo.

It’s hard to forget he existed given the constant reminders on social media of how far he’s fallen, but what a player Stephen Ireland could have been. For all the world-class players arriving at City, it was he who shone brightest in their first season under new ownership.

After failed spells at Aston Villa, Newcastle and Stoke, the midfielder found himself at Bolton in 2018 but was released without making an appearance.

Would Middlesbrough have survived the next season if Southgate didn’t sell Schwarzer and Rochemback?

Did City really throw the game?

Could City have achieved greatness under Sven's stewardship?

Do you think Michael Ball has stopped running into walls yet?