Karanka urges Ben Gibson to focus on Middlesbrough rather than England 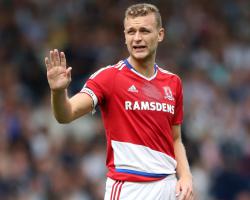 Middlesbrough defender Gibson has impressed at the start of his first season of Premier League football, sparking speculation that Allardyce will call him into his squad for the World Cup qualifiers in either October, when they face Malta and Slovenia, or November when Scotland and Spain are their opponents.

Boro head coach Karanka has been delighted with the former Under-21 international's progress during his time at the club, but is wary of the demands a senior international career could place on one of his key men.

Asked what he would tell Allardyce if he called him about Gibson, he replied with a smile: "Everything - that he's a bad player, a bad person...".

Karanka added: "He is the kind of player that just looking at him, you can feel that he is a really good lad

He's a player who likes and who wants to improve every single day and for that reason he has improved in the last two-and-a-half years.

But he has to continue to improve because, for me, he is an important player on the pitch if he plays in the way that he is playing."

Gibson, the 23-year-old nephew of Boro chairman Steve, has emerged from the ranks on Teesside at times having to deal with the accusation that he has only got as far as he has because of his family connection.

However, that is simply not the case, with the central defender, like every other player, having to prove himself at every level.

Karanka knows an England call-up would represent a rich reward for his hard work and is confident it would not affect him adversely.

He said: "He's a good character, but sometimes you can drive yourself crazy

It would be fantastic.

"But at the moment he is playing here and he has to think that we have to win the games here and then he can think about the national team.