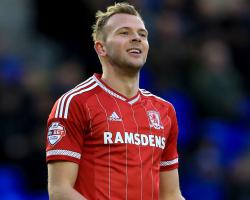 The 26-year-old Scotland international, who completed a ÃÂ£9million switch from Blackburn to the Riverside Stadium in January, played his part in the club's promotion drive and will now have the opportunity to test himself against the best in the top flight.

He told the club's official website, www.mfc.co.uk: "It's hard to put into words

It's a childhood dream of mine.

"Before the season even starts, I'm looking forward to getting the Panini sticker book, finding my picture and sticking it in, all of those things that you dream about when you're seven or six years old going to school!

"The whole season and year is going to be a bit surreal and if I can play a few games, that will just be all of my lifelong dreams come true.

"It will be fantastic going to the big stadiums and playing against some of the best players in the world.

"The normality of playing the Premier League will be something that for me personally, I won't take for granted because I've always dreamt about it."

Meanwhile, Boro will formally confirm the ÃÂ£3.8million capture of Ajax winger Viktor Fischer when the international transfer window opens next month after the 21-year-old travelled to Teesside to undergo a medical and discuss personal terms.