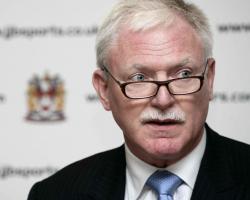 The Oxford director will replace Greg Clarke following the annual general meeting on June 10, when league clubs will be asked to ratify the appointment.

Clarke announced in December he would step down from the role he has held since 2010.

Lenagan, who is the chairman of rugby league side Wigan, has been on the Football League's board since 2013.

Lenagan said: "It is a great honour to be asked to be chairman of the Football League and lead our 72 clubs in the next stage of our development under the new EFL brand

I look forward to continuing the board's progressive work that is being delivered for the benefit of all our member clubs."

Clarke added: "I am delighted to leave the Football League in very safe and very capable hands and I will work with Ian throughout the rest of my time at the league to ensure a smooth transition to his leadership."