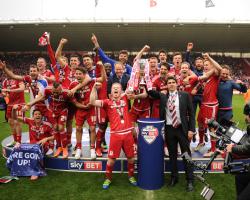 Coming on the same day as 5,000-1 shots Leicester lifted the title, ambitions amid the celebratory Teesside atmosphere inevitably strayed to top-flight success, with midfielder Adam Clayton insisting: "We'll have two months off and come back ready to go and try to do a Leicester."

Cristhian Stuani, recalled to the starting line-up by Boro boss Aitor Karanka because he felt the Uruguayan "had something more to give", struck the 19th-minute opener which got the party started before Dale Stephens - who was shortly afterwards sent off - ensured an anxious ending with a 55th-minute equaliser.

Ultimately, Mike Dean's whistle guaranteed Boro the point they needed and sparked a jubilant pitch invasion to mark their first return to the top tier since their relegation under Gareth Southgate seven years ago.

Southgate, still fondly remembered on Teesside, offered a much more sober assessment of Boro's Premier League chances next season, but believes the club, backed by a sell-out crowd of over 33,000 on Saturday, can stay there and prosper.

"I think there will be a momentum with Middlesbrough

I think for the next couple of years, maintaining that status will be seen as a positive.

"The expectations will be a bit lower, but the energy in the stadium will give the team every chance of success."

Brighton boss Chris Hughton was gracious in defeat, although he did criticise Dean for sending off Stephens following a scything challenge on Gaston Ramirez which left the Uruguayan requiring stitches.

Stephens' dismissal effectively ended any momentum the Seagulls had gained from his equaliser three minutes earlier, and consigned them a two-legged play-off semi-final against Sheffield Wednesday.

Hughton said: "In another season we would have gone up automatically, but that's how it is - you're always going to look back at the moments when you could have got more points.

We're still in with a shout and we're ready and fighting."