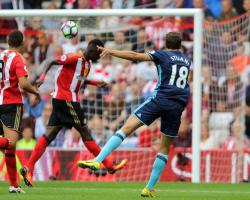 Stuani's first-half double secured the three points at the Stadium of Light, although the Teessiders had to weather a second-half fightback after David Moyes' men gave themselves a chance with Patrick van Aanholt's 71st-minute strike.

But to the disappointment of the locals among a crowd of 43,515, it was the top-flight newcomers who emerged victorious on an afternoon when the Black Cats, who have not won a Premier League game in August or September since 2012, were made to pay for both defensive frailty and wayward finishing.

Moyes had been encouraged by his side's performance in the opening-day defeat at Manchester City, but having seen his resources further depleted by Younes Kaboul's departure for Watford, want-away defender Lamine Kone's back injury and Fabio Borini's absence with a toe problem, the XI with which he started had an inexperienced look about it.

That said, Adnan Januzaj, Lynden Gooch and Duncan Watmore all started in promising fashion as the Black Cats took the game to their neighbours, although with star striker Jermain Defoe strangely subdued, they were able to create little of note before disaster struck.

The Teessiders had negotiated the first 13 minutes largely pinned back inside their own half and there did not look to be a great deal on when Stuani and Alvaro Negredo exchanged passes during a rare foray into enemy territory.

But the Uruguayan took full advantage when he took aim from distance and sent a dipping shot over the astonished Vito Mannone and into the top corner.

With Adam Forshaw and Adam Clayton operating in front of the Boro back four, they began to gain a foothold in the game, and Sunderland's fortunes took a turn for the worse nine minutes before the break when skipper John O'Shea limped off, prompting Moyes to employ Jack Rodwell as an emergency central defender alongside debutant Papy Djilobodji.

But the home side was dealt another sickening blow on the stroke of half-time when the impressive Negredo collected Forshaw's reverse pass, stepped inside Rodwell and squared for Stuani to smash home his second.

Moyes' response was to put defensive midfielder Paddy McNair out of his misery after the break and introduce Jeremain Lens, and Defoe had early penalty appeals waved away after going down under Antonio Barragan's challenge.

Januzaj might have equalised after running on to Lens' pull-back on the hour, only to scuff his attempt horribly, although Brad Guzan had to get down well to palm away Van Aanholt's drive seconds later as Sunderland stepped up a gear.

They would have been back in the game within five minutes had Ben Gibson not thrown himself into the path of Defoe's close-range effort, but they were with 19 minutes remaining when Guzan would only parry Watmore's strike and Van Aanholt followed up to score.

Boro, just as they had done last weekend against Stoke, visibly tired as time ran down, but they managed to hold out amid a late onslaught.