Aston Villa's triumph over Derby County in the Championship play-off final last week concluded what has been an epic season of Championship football.

​What lies ahead now is an agonisingly long wait for it to get started all over again. For most clubs, the summer will be one of rebuilding as they look to put the measures in place to achieve promotion to the Premier League.

Inevitably, this off-season period brings us a summer of transfer rumours, managerial changes and much more.

Let's take a look at the stories from around the ​Championship right now. 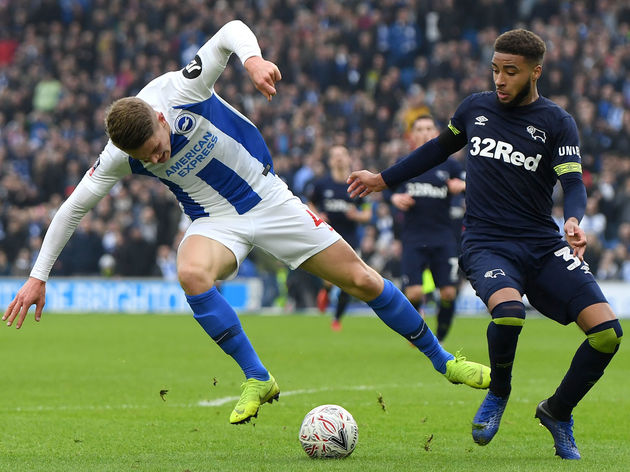 ​Derby's breakthrough youngster Jayden Bogle could be on his way out of the club after just one season of senior football. The right-back made 50 appearances for the Rams in his first year after being introduced to first-team action by manager Frank Lampard.

After his stellar season, The Sun claim (via ​HITC) that the 18 year-old is on his way to the Premier League to join ​Brighton & Hove Albion for £10m, following the appointment of Graham Potter as manager.

A deal involving Christian Walton moving in the other direction on loan has been mooted, with goalkeeper Kelle Roos, whose costly blunder in the Championship playoff cost Derby dear, likely to lose his place in the team if a deal materialises.

For some reason, the end of this season has seen a rapid increase in the exchange of petty insults, or childish swipes at rival clubs. Leeds for example took the opportunity to have a dig at Derby (and bizarrely Niall Horan) for the club's failure to secure promotion.

Whilst some fans find the attempts at 'banter' amusing, the EFL are expected to warn clubs to tone down this sort of behaviour at their annual meeting this summer, as reported by the ​Daily Mail. ​Championship goal-machine ​Dwight Gayle is being lined up by ​Middlesbrough, as they look to build a strike force capable of firing them back to the top flight of English football.

The striker, who spent last season on loan at ​West Brom from ​Newcastle, scored 24 goals for the Baggies, leading them into the play-offs. As reported by ​Daily Star, Albion have ruled themselves out of another loan move for the forward, and Boro head the list of clubs looking to make a swoop.

The Riverside club just missed out on the play-offs this season, and will hope Gayle can help them into the top six in the next campaign. Just as Gayle could be coming in at the Riverside, star striker Britt Assombalonga could be on his way out.​

As reported by ​The Sheffield Star, the 26-year-old is being lined up by ​Premier League new boys ​Sheffield United, as they look to bolster their striking options ahead of their first top flight season in 12 years.

However, in an effort to satisfy the EFL's profit and sustainability regulations, the Blades are angling for a cut-price deal, as they are reluctant to match what Boro paid for the striker two years ago. ​Following promotion with ​Aston Villa at Wembley, Glenn Whelan now finds himself out of contract, as the midlands club opted not to offer new terms.

​StokeOnTrentLive say the 35-year-old free agent is keen on reuniting with former club ​Stoke City, for whom he made nearly 300 appearances during a nine-year spell.

With Potters boss Nathan Jones favouring a diamond midfield, Whelan would be a good fit to play at the base of the four. Jones is expected to be a busy man this summer, as he looks to rebuild his Stoke squad and the capture of Whelan would be the perfect way to get fans on board from the off. ​Bruno Labbadia has emerged as the front runner for the ​West Brom managerial job, as the Baggies look to find a permanent replacement for Darren Moore, who left the club towards the end of the season.

A move for Labbadia, who has a wealth of experience in the ​Bundesliga, suggests Albion may be looking at the ​Norwich City approach in order to earn promotion back to the top flight; the Canaries having hired German boss Daniel Farke, who this season led them to the Championship title.

​Birmingham Mail report that the Wolfsburg boss has held talks with the Hawthorns club, but they are waiting to speak to more candidates before naming their standout pick.