Aitor Karanka would be happy for Middlesbrough to finish 17th 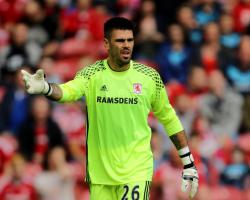 Promoted Boro's encouraging start to their first campaign back in the top flight has been somewhat forgotten after a run of five games since the September international break which has yielded only a single point.

As a result, they head for Arsenal on Saturday perched just above the drop zone but ahead of 18th-placed Stoke only on goal difference.

However, if they find themselves in that same position after their final-day trip to Liverpool on May 21 next year, their head coach will be thrilled.

Asked if the current position was a concern, Karanka said: "For me, I don't care because I want to be in this position in May.

"I said always in the Championship when you asked me about being first or second or third at that moment, I said always that my aim was to be at the top or second in May.

"We were second last season so we are in the Premier League now and if in May we finish 17th, I will be really, really pleased."

Karanka could have done without a trip to the Emirates Stadium to face in-form Arsenal having seen his side succumb 1-0 at home to Watford in a drab affair last Sunday.

The Gunners destroyed Bulgarian champions Ludogorets 6-0 in the Champions League in midweek, and although Karanka could have been forgiven for watching the game through his fingers, he did not learn anything new from a devastating display

He said: "I watched the game, but I didn't need to watch the game to know their players, to know their style because they play always in the same way.

"We just have to have our idea and our plan and go there thinking that we can beat them."

If Boro are to prosper in North London, they may need a special performance from hugely-experienced goalkeeper Victor Valdes, who is yet to keep a clean sheet in six appearances for the club to date.

However, Karanka has been delighted with how the 34-year-old former Barcelona and Manchester United star has settled on Teesside and is expecting big things of him.

He said: "I'm really pleased because I see him on the pitch, at the training ground, in the changing room or the canteen and his face is always positive, he's always happy.

"He is settling step-by-step because to come from Barcelona, Manchester United, from there to here, is not easy

But he knows he's an important player for us on the pitch and especially off the pitch.

"He's a winner, so it's not a coincidence, his CV

For that reason, even in the Premier League at Middlesbrough Football Club he wants to win and he demands from every single player that we have to win.

"That character is good for the team at this moment."