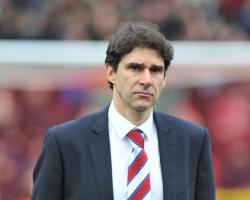 The 42-year-old Spaniard looked to be heading out of the exit door at the Riverside Stadium when it emerged he had left the club's Rockliffe Park training headquarters suddenly and unexpectedly after a team meeting.

Karanka was not in the dug-out for Sunday's 2-0 Sky Bet Championship defeat at Charlton, but the club announced on Monday evening that he would resume his role as head coach with immediate effect.

Speaking to the club's official website, www.mfc.co.uk, Karanka said: "They have been strange days for the people who have not been involved in the situation.

"The club and me had everything clear

I want to make it clear that the club never thought to sack me and I never wanted to leave.

I heard a lot of stupid things that I was laughing at at home.

"To hear that I have problems with players in this changing room when they have given me every single thing..

if I am in the position I am in now and the team is now, it's thanks to them."

Karanka held a meeting with his players and staff on Tuesday to thrash out the way forward after chairman Steve Gibson had moved to find a solution and refocus attention on the club's bid for a return to the Barclays Premier League after a seven-year absence.

Boro, play-off final runners-up at the end of last season, currently sit second in the table, but are now seven points adrift of leaders Burnley with a game in hand having won just three of their last 11 games and after squandering a healthy advantage over their promotion rivals.

They face third-placed Hull at the Riverside on Friday evening and Karanka is eager to put the last few days behind him and concentrate on a potentially pivotal 90 minutes after insisting he has not lost the confidence of his players.

He said: "It wasn't the case, it's not the case and I am going to fight for these players and this club as I have done to this moment.

"When you hear something that was hurting - especially my family, because they are in Spain and it was difficult for them because they thought I hadn't told them the truth because I wanted to protect them

When they found me calm at home, it was difficult for them.

We have to look forward

We have an amazing month in front of us, we have some amazing fixtures, some amazing games at home, so we will keep going."