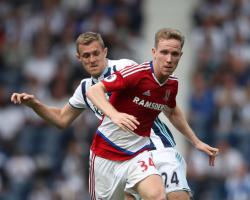 "As a barometer we are more than capable of playing in this league," he told the club's official site.

"We can take positives, at times we played well and matched them

We're going into the international break unbeaten so it's been positive."

Boss Tony Pulis has been blooding his youngsters as the Baggies struggle for numbers and Sam Field made an impressive full Premier League debut in midfield, with the 18-year-old earning praise from goalkeeper Ben Foster

He is an absolutely fantastic young lad," he told the club's official site

"He gets hold of the ball and he is very elegant and classy in the way that he plays the game."