5 things we learned from the Football League this weekend 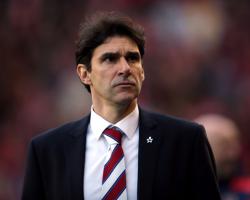 Wigan celebrated promotion from Sky Bet League One, with Burton on the brink of the same, but League Two will go right to the wire

Bigger than the play-off final?

However, Aitor Karanka's men host Brighton next weekend in a true winner-takes-all clash and, with home advantage, the Teessiders must be in a confident mood

Too close to call

Accrington, Oxford and Bristol Rovers are all separated by just two points as they look to join Northampton in League One next season

Accrington and Oxford each know home wins against Stevenage and Wycombe respectively will secure automatic promotion, but anything less and it allows Bristol Rovers the chance to leapfrog them into the top three, providing they beat already-relegated Dagenham

Albion only became a Football League club in 2009

Now they are within touching distance of being in the same league as fellow Midlands outfit Aston Villa.

A third relegation in five years is coming for Doncaster

If the Cod Army do not gain a point against promotion-chasing Walsall on Monday, Doncaster's relegation will be rubber stamped at home to Burton on Sunday barring a miraculous turn of events

Rovers were among the teams tipped to battle for promotion at the start of the campaign but are likely to be back playing in the bottom tier of the Football League for the first time since 2004.

Waiting for a call

Set a points target after he replaced Jamie Fullarton, Cooper has since managed to stave off relegation and is close to reaching the mark

Things were helped by the 1-0 away win over Newport, which also ended their three-match losing run in the league

A home win against Carlisle next week and perhaps the dotted line will be his for the signing?