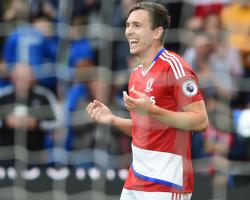 The match will be remembered for Gaston Ramirez's scintillating 70-yard run and finish, already a credible contender for goal of the season, but of wider significance was Boro's first home win of the campaign.

With games against Manchester City, Leicester and Chelsea on the horizon, it was a crucial three points for the Teessiders following a mixed start to the campaign.

Downing had his own reasons to celebrate too, finishing a fine move from close range to double the lead early in the second half.

That was his first top-flight strike since returning to his hometown club, the last having come in May 2008 in an 8-1 win against Manchester City.

"It was the perfect day

We played well, defended well, attacked, got goals and could have got a couple more," he told BoroHD.

"It was a really big win for us

It gets that monkey off our back.

Getting the goal was the bonus.

"The timing of it was important

I wouldn't say it killed them but it makes them have to force it a little, so we countered a few times and could have scored more."

For Bournemouth, the 600-mile round trip was a major disappointment.

After four games unbeaten their progress stalled at the Riverside and captain Simon Francis was sorry not to have done more for the hardy away contingent, who have yet to see victory on the road this term.

"The fans were great and I could hear them all game," he told BBC Radio Solent.

"The fans came a long, long way and turned out in thousands as they do - it's really disappointing we couldn't get a result for them.

"It's strange, last season we were struggling at home and doing well away and it's a complete reverse so far

We need to try and find a balance, it's a bit of a wake-up call."

Francis also tipped Aitor Karanka's side to follow the Cherries' lead by staying in the Premier League following promotion from the Championship.

"They have good players and a good squad, a real togetherness, so I think they will stay in this league."