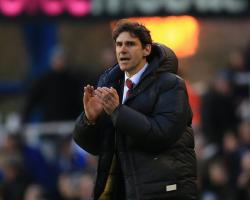 Karanka watched City's 3-1 win and described their performance as "amazing" but maintains Boro have every chance of giving Pep Guardiola's men a tougher run for their money.

The Spaniard said: "Sometimes when you play against teams you are not used to maybe they can surprise you, but it was not a surprise.

"They have amazing players and they have all the alternatives so (for them) it was just another game.

"Every single day I always enjoy watching a good team, whether it is Barcelona or Real Madrid or Arsenal

As a football man you always like to watch good games."

Boro will go into the weekend with their confidence high after last week's 2-0 win over Bournemouth, despite the loss of star man Gaston Ramirez for the trip to City.

Ramirez is ruled out after picking up his second booking of the season against the Cherries, but top scorer Cristhian Stuani is set to provide a timely boost by returning from injury.

Karanka added: "Gaston Ramirez has been an important player for us not just in the last few weeks, but he was also really important last season.

"But as a team we have to play with 11 players

You can't be negative, you have got to stay positive."