Middlesbrough close on Burnley as leaders held at home by Cardiff 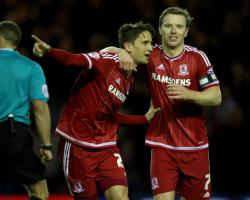 The Clarets extended their unbeaten league run to 17 games but will be looking nervously over their shoulder ahead of the final half-a-dozen fixtures as nearest challengers Middlesbrough and Brighton both won.

Sean Dyche's side could have ended the night level on points with second-placed Boro too had Kenneth Zohore's 87th-minute effort gone in rather than hit the crossbar, though the Bluebirds were indebted to two terrific stoppage-time saves from goalkeeper David Marshall.

Second-placed Middlesbrough are breathing down Burnley's necks after Gaston Ramirez inspired a 3-0 win over Huddersfield.

Ramirez earned the penalty which was converted just after the half hour by skipper Grant Leadbitter before netting himself moments later.

The 25-year-old, on loan from Southampton, then curled in a brilliant free-kick with 13 minutes remaining to keep Boro a point ahead of third-placed Brighton, who defeated Birmingham 2-1 at St Andrew's.

Northern Ireland striker Kyle Lafferty put Blues ahead after a quarter of an hour but headers from Connor Goldson and Lewis Dunk either side of the interval sealed victory for the Seagulls.

Hull's promotion hopes took a severe blow after a comprehensive 4-0 loss at Derby, who consolidated their place in the final play-off spot.

Their woes were compounded by late strikes from Chris Martin and Craig Bryson.

Sheffield Wednesday remain a point ahead of Derby in fifth after a 2-1 win over Blackburn.

The Owls took full advantage of the extra man as Ross Wallace scored the winner after 62 minutes.

Bolton continued their path towards relegation as they slumped to a 3-1 defeat at Brentford, for whom Lasse Vibe struck a first-half brace after team-mate Nico Yennaris had opened the scoring.

The Trotters, who grabbed a consolation through Zach Clough's penalty, are 17 points from safety with just the 18 left on offer.

Matt Derbyshire's goal for the Millers was cancelled out by Peter Odemwingie.

Neil Warnock's men are now six points clear of MK Dons, who opened the scoring through Kortney Hause's own goal but lost 2-1 to Wolves following strikes from George Saville and Jack Price.

Ross McCormack and Moussa Dembele scored either side of Marnick Vermijl's leveller as Fulham won 2-1 at Preston, while Reading defeated Nottingham Forest by the same scoreline following goals from Matej Vydra and Oliver Norwood after Ben Osborn had given Forest the lead.

Tjaronn Chery's penalty three minutes from time helped QPR to a 1-1 draw at Leeds, who had opened the scoring through Chris Wood's 70th-minute strike while Ipswich and struggling Charlton shared the spoils in a goalless draw.