Middlesbrough close in on signing of Viktor Fischer 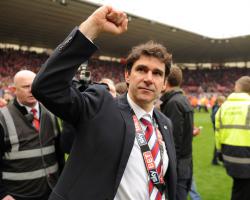 Press Association Sport understands Ajax winger Viktor Fischer is due on Teesside to undergo a medical and discuss personal terms with the two clubs having reached agreement on a fee of around ÃÂ£3.8million.

Sources close to the player have indicated there is a four-year deal on the table for the Denmark international, who made 34 appearances for the Dutch club last season.

Karanka has wasted little time in starting to reshape his squad in the wake of promotion having released veteran Jonathan Woodgate and fellow defender Damia Abella at the end of their contracts on Tuesday.

It had already been confirmed that injury-plagued utility man Rhys Williams would be heading back to his native Australia to join Perth Glory.