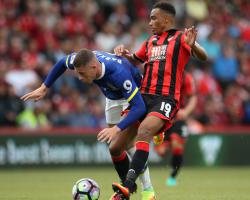 Stanislas proved Everton's tormentor-in-chief for the second season running, firing the only goal on the south coast - to add to his late brace that stole a 3-3 draw last term.

This time the Cherries needed no last-gasp heroics however, as Stainslas' 23rd-minute strike proved sufficient to secure a second win of the campaign for Eddie Howe's men.

Everton's fine start to Premier League life under new boss Ronald Koeman hit the skids on the south coast, with the visitors unable to find rhythm or fluency.

The Toffees were unable to add to their four wins and one draw in the league, perhaps still smarting from their 2-0 midweek EFL Cup home defeat to Norwich.

Bournemouth boss Howe and his charges cared not for Koeman's troubles however, with a priceless second league win of the campaign safely in the bag.

Everton will return north with Koeman left to ponder the lack of impact from ÃÂ£25million summer recruit Yannick Bolasie, and general disconnect between striker Romelu Lukaku and his supporting cast.

Bournemouth dominated an engaging first half, Stanislas' fine 20-yard strike separating the sides at the break.

Everton had only themselves to blame for trailing by that solitary goal at the turnaround, the visitors curiously sluggish in possession.

Artur Boruc saved well from Romelu Lukaku's point-blank header, but after that the Toffees struggled.

Jack Wilshere ought to have opened the scoring, only for the lunging Seamus Coleman to deflect the ball on to the bar.

Callum Wilson outmuscled Ashley Williams before squaring unselfishly to the onrushing Wilshere, and the Arsenal loanee really should have buried the gilt-edged chance.

Harry Arter's drive across the face of goal brushed the outside post with Maarten Stekelenburg motionless.

But just when Bournemouth started to fret about missed chances, Stanislas produced the first half's superlative moment, driving home from outside the box.

Arter's inside ball found the 26-year-old in far too much space, and the former West Ham forward duly seized full advantage.

Everton's frustrations grew as the second-half unfolded, with the relentless Arter increasingly adept at stemming the Merseysiders' approach play.

Boruc tipped away Gerard Deulofeu's testing cross, while the largely anonymous Bolasie drove over from 18 yards.

What rallies Everton could muster came to nothing, Bournemouth holding firm despite five minutes' stoppage time for a fully-merited victory.