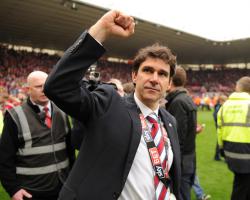 Karanka almost quit Boro in March after a run of poor form and a breakdown in his relationship with the board.

His assistant Steve Agnew had to take charge for the visit to Charlton Athletic, a match Boro lost, but Karanka returned to work a few days later and led the team to second place in the Championship, ending a seven-year absence from the top flight.

Karanka, who was Jose Mourinho's assistant at Real Madrid, joined the Teesside club in 2013 and took them to the final of the Championship play-offs in 2015, only to lose to Norwich City.

"I'm very happy for the club, the fans and Aitor Karanka," said Mendieta, who was speaking at the Soccerex Americas conference in Mexico City.

"They were very close last year but unfortunately didn't make it, so I'm very happy to see the club has believed in Aitor's philosophy and the way he works.

"All relationships go through times when you might disagree but I think the important thing is to talk and sort things out.

"They did and they fixed whatever it was that happened

Fortunately, it didn't affect the team, which is the important thing, and they had success.

"So I have to give credit to all parties - the club, the team, Aitor, the fans - that they've believed in something and got the result they wanted

The club deserves to be in the Premier League."

Mendieta, who was named the best midfielder in Europe in 2000 thanks to his performances for Valencia and Spain, joined Boro in 2004 from Lazio.

The 42-year-old, a Basque like Karanka, played 83 games for the Riverside club, winning the League Cup in his first season, but struggled with injuries in his final season and was forced to retire in 2008.