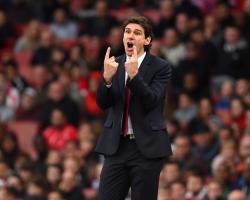 Middlesbrough's 43-year-old head coach will go head-to-head with Bournemouth counterpart Eddie Howe, five years his junior, in the Premier League on Saturday with the pair having led their respective clubs out of the Sky Bet Championship.

Karanka, a disciple of Manchester United manager Jose Mourinho, freely admits he is learning all the time as he makes his way as a coach, but he insists even the game's biggest names cannot afford to be complacent.

When you are old and you think that you know everything, it's a big mistake.

"Every single one who comes in, like Eddie, like me, like others - Gareth (Southgate) with the national team - when we arrive, the veteran managers need to know they can't sleep.

Karanka will send out his team, for the 150th time since his arrival at the Riverside Stadium, against the Cherries on Saturday scarcely believing his reign has already reached those proportions.

He said: "I can't imagine

"I have always said that when I met (chairman) Steve Gibson, I knew that to come here was the best decision.

"After three years, we have grown together because the club was going to League One and we are in the Premier League.

"We have to trust each other

Steve, I think, trusts me and I trust him and the club and everything

This is the way."

Boro are without a win in eight games in all competitions and are still to taste victory at home this season, although they raised morale significantly with a goalless draw at high-flying Arsenal which few foresaw, prompting defender Ben Gibson to praise the fighting spirit within the squad.

Gibson told the club's official website: "We were written off on a few occasions last season, but still got promoted and I firmly believe that if we keep that fight and mentality that we showed on Saturday, then we'll stay up."

Karanka agreed with that sentiment.

He said: "Maybe that's my personality

Sometimes when you are criticised, you have to work harder, to work more to show everybody that you are doing the right things and you can do your job."