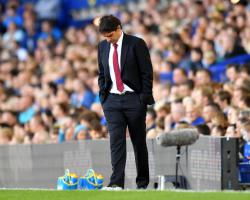 Promoted Boro enjoyed a positive start to life back in the top flight when they took five points from their opening three games against Stoke, Sunderland and West Brom and felt they were unfortunate to emerge empty-handed from a home clash with Crystal Palace in their next outing.

However, the defeat by Palace has been followed by two more at the hands of Everton and Tottenham, and while the club's fate may not ultimately be decided by what they do against clubs occupying the higher reaches of the division, head coach Karanka insists they cannot afford to write off those games.

"We have to try to add the points as soon as possible and forget who the opponent is because when we play with our intensity and our style...

"We played really well against Everton and when we played with our intensity and our consistency and the right attitude, we were at least as good as Tottenham, and we are speaking about a team which is playing in the Champions League and is unbeaten in the Premier League.

"We have to keep going in that way

We are learning, but we have to learn quickly because the games are going and we are losing games."

Boro will attempt to end their three-game losing run when they head for West Ham on Saturday looking to pile on the misery for the Hammers, who have lost their last four in the league, two of them at their new home, the former Olympic Stadium.

Slaven Bilic's men finished the last campaign in seventh place but currently sit inside the bottom three, two points worse off than this weekend's visitors.

That has come as a surprise to Karanka, but he does not expect a poor run of form to continue indefinitely.

Asked what had changed, the Spaniard said: "I don't know

"They are not in the best moment, but they are a good team, they have a good manager

They had an amazing season last season, so our biggest mistake would be to go to play against West Ham thinking that they have problems because they are not winning games.

"They are going to start winning games and I hope it's not on Saturday."