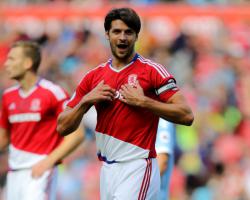 The 28-year-old full-back felt the full force of Wilfried Zaha as the Eagles ran out 2-1 winners at the Riverside Stadium last weekend with the Palace winger taking full advantage of the Boro defender's second-half error to score the decisive goal.

However, as he and his team-mates prepare to continue their Premier League education with a difficult trip to unbeaten Everton, Friend has received a ringing endorsement from his head coach.

Karanka said: "George is the son every mother wants to have, the husband every wife wants

"When I say how proud I am of my players, he is one of them because when I came here, he had come from Doncaster, the club at that time was going to League One, and for me to have players like him on the pitch is a pleasure.

To blame one player or two players or three players, I don't think is fair because we are in the table with five points because all of them have been doing really well.

"The player who makes a mistake, they know and I know when I make mistake

You don't need to tell him about the mistake

We have to think just about the following game, to think we have to fix those mistakes and keep going."

The defeat by Palace was Boro's first since their return to the top flight and followed a victory at Sunderland and draws with Stoke and West Brom.

With Everton, Tottenham, West Ham and Arsenal among their next five opponents, the going will be significantly tougher, although Karanka, who saw the Toffees win 3-0 at the Stadium of Light on Monday evening, is keeping a level head.

"We have to work in the same way

We are going to win games, we are going to lose, for sure, more games than we lost last season because we are in the Premier League.

"On Saturday, we realised it was a good wake-up call to say that we are in the Premier League

I would have preferred to have had that wake-up call with three more points, but it was impossible."