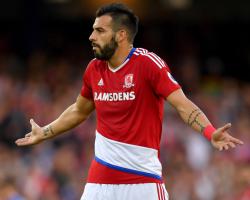 The 31-year-old Spanish striker, who is at Boro on a season-long loan deal from Valencia, announced his return to English football with a goal in the 1-1 opening day draw with Stoke.

However, he has not registered since - although he did play a key role in keeper Maarten Stekelenburg's own goal in the 3-1 defeat at Everton last month - and lost his place to Jordan Rhodes for the trip to West Ham before the international break.

Karanka admitted a man who cost Manchester City ÃÂ£20million when they signed him from Sevilla in July 2013 and Valencia just ÃÂ£1million less two years later could be feeling the pressure of his reputation, and has challenged him to rediscover the edge which characterised his early performances for the club.

He said: "I am here to try to take that pressure off

I knew for him, it was going to be difficult.

"He started really well, but sometimes it's normal when you start really well and you feel really, really confident, you start to be a little bit more relaxed and you lose your position.

"For that reason, he has to fight

He is fighting a lot on the training ground because he failed against West Ham, but at this club, nobody is bigger than the team.

"He is learning because it's important for everybody to know that the main thing here is the team.

"But playing his best, I can compare him with [Christian] Benteke or [Romelu] Lukaku and the better strikers in the league."

This weekend sees Middlesbrough renew acquaintances with former Sky Bet Championship rivals Watford, who beat them into the top flight by 12 months.

Boro are still looking for their first home win of the campaign, having taken just one point from their last four outings after opening the season with five points from seven.

They took a point last time out in a 1-1 draw at the London Stadium, secured by Cristhian Stuani's third goal of the campaign.

Stuani, although a striker by trade, has been used more often than not as a wide midfielder by Karanka, although the head coach is well aware of his potency

Asked if the Uruguay international, who played only 20 minutes of his country's 2-2 draw in Colombia as a substitute on Tuesday evening, represents another option up front, he said: "Yes, because he played the last 30, 35 minutes against Tottenham.

"He prefers to play as a number nine, but I told him when I signed him which position he was going to play.

"But I know as a second striker or as a striker, his record has been really good, so for that reason I used him against Tottenham and for sure, I am going to use him again."